The Government’s most recent white paper on Housing (1) is a useful resource for understanding the UK’s current housing crisis. Housing is increasingly unaffordable. The average house costs almost eight times average earnings, an all-time record. As a result it is difficult to get on the housing ladder, and the proportion of people living in the private rented sector has doubled since 2000. These high housing costs hurt ordinary working people the most.

“Our housing market is broken.. particularly for ordinary working class people -who are struggling to get by”
Teresa May, Prime Minister Government White Paper 2017

More than 2 million working households with below-average incomes spend 1/3 or more of their disposable income on housing. This means they have less money to spend on other things every month, and are unable to put anything aside to get together the sums needed for a deposit. And many worry about the ability of their children and grandchildren to afford their own home and to have access to the same chances in life that they have enjoyed.

An exciting new phase of funding for affordable homes
In October 2017, Theresa May committed an additional £2 billion to affordable housing, representing a sizeable bump to the £7 billion the government had already pledged over the parliament for the Affordable Homes Programme. (2)

In late 2017, the Housing Minister, Alok Sharma MP, announced an investment of £240 million in affordable housing, in the form of the Community Housing Fund, designed to help get projects off the ground across the UK….another step towards helping people get a foot on the housing ladder. (3)

“Sadly, as things stand currently, only a quarter of thirty year olds will own their own home by 2020, This figure is likely to be even lower in the South Hams in particular, where the ratio of median house price to median income is over 10”. (4)

The South Hams has just under 4,000 second homes which makes up over 9% of the total households, therefore the impact of second homes is very acute.

Boost to fund for South Hams

As a result of the high density of second homes South Hams District Council have received a £1.88m boost to fund the development of affordable homes. The SGCLT has already taken advantage of this fund, having received a "Seed Fund" grant of £2000 to help us get up and running. The fund can also be used to get us through the planning stages, and possibly further.... 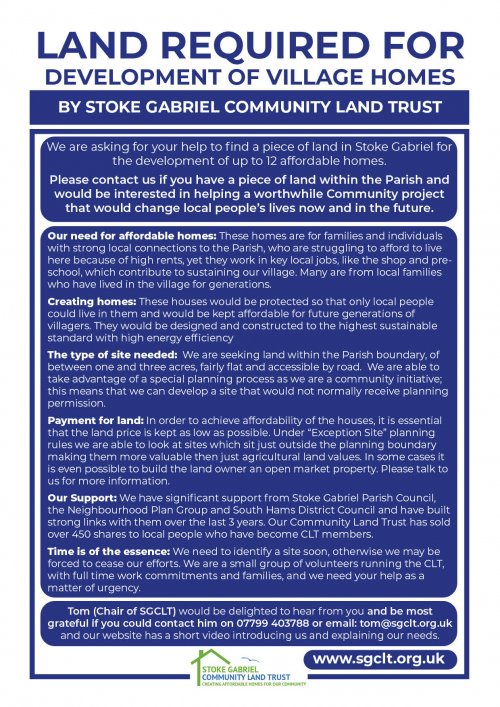 Parish Council Meeting - Approve the principle of development by SGCLT of identified land at Duncannon Lane
30th : May : 2019 Drop in Housing Needs Event with the Neighbourhood Plan Group

See all news >>
Working in Collaboration with: