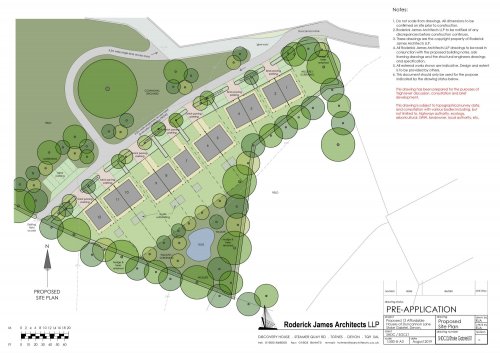 Tom Morris and Marie Howard introduced the team and between them explained the history, processes and reasoning behind the the community desire to bring forward truly affordable housing for the people of Stoke Gabriel . The site section process was explained fully as were the potential layout and design of the 12 houses - although it was stressed that at this point , the proposals were at concept stage - and so subject to potential changes.

Tom advised that Highway concerns had been addressed by the introduction of a one way system on the new adopted road. It was also mentioned that there was now a need to progress the project as Homes England Grant funding was due to be withdrawn at the end of 2019 - with no indication whether a new Grant scheme would be introduced for 2020 onwards. It was AGREED that the presentation be placed on the website for Parishioners convenience and also in the "Gallery" of the SGCLT website

Matters raised by Parishioners / Councillors
1. It was imperative that the Parish should be consulted / involved when detailed designs / layouts were prepared - NOTED
2. It was also important that the CLT works with the NP group - NOTED
3. It was noted that there could be an element of open market housing - Tom explained that this may be required to fund the build costs should grant monies not be forthcoming but that it was the hope that the whole scheme would be 100% Affordable
4. From where would the housing be visible - The housing is well screened and in such a position that they can not be seen from the other side of the River, the SG riverside or the Mill Pond. (See LVIA in Gallery linked above).
5. Confirmation that there are no covenants attaching to the site - Confirmed by owner

The Chairman thanked the CLT team for the clear and informative presentation. It was AGREED that each Councillor had sufficient information on which to base a decision. It was RESOLVED that Stoke Gabriel Parish Council approves in principle of development by Stoke Gabriel Community Land Trust at identified land at Duncannon Lane, Stoke Gabriel - given the information supplied to date.

Unanimous decision - by show of hands


Working in Collaboration with: